TripAdvisor – plan your next trip with dark mode on

The history of TripAdvisor

TripAdvisor was initiated by Nick Shanny, Langley Steinert and Stephen Kaufer back in the year 2000. It was the idea of Stephen Kaufer to come up with a user generated social media network, which can exchange reviews. At the beginning, the team focused more on the usage of official words, such as magazines, newspapers and guidebooks. It encouraged visitors to go ahead and add their own reviews. On the other hand, visitors were also provided with the chance to go through the existing reviews and get meaningful information at the end of the day.
In the year 2009, TripAdvisor went ahead and launched the official website in China. The company has been growing since then and it has added more than 20,000 restaurants and hotels from all over China. As of now, TripAdvisor is one of the biggest travel websites based in the country. Year 2018 was one of the most prominent milestones in the history of TripAdvisor. That’s where TripAdvisor incorporated with Door Dash in order to take restaurant listings to a whole new level.

People who travel the world, either for leisure or business are the main visitors of TripAdvisor. Before booking a hotel or before visiting a restaurant, they prefer to take a look at reviews that are available on the website. These reviews are in a position to help them with understanding what kind of a service that they can expect. On the other hand, they also prefer to leave reviews on the hotels and restaurants that are listed in TripAdvisor. It helps them to share their experiences about the business and educate others.

User generated reviews can be found in TripAdvisor. It provides ability for the users to leave their honest feedback on businesses listed, including hotels and restaurants. Along with the reviews, they are provided with the chance to upload some photos as well. All the content that is available on TripAdvisor are user generated. On the other hand, people can think about using TripAdvisor to get to know about the top tourist attractions that are available within a specific destination as well.

If you, like most people, are spending quite a lot of time on TripAdvisor planning your next trip, there is high chance that:One thing that will make your research more pleasant and reduce the eyestrain caused by hours spent on TripAdvisor is browsing it in dark mode.

Sadly TripAdvisor does not offer built-in dark theme of their website, so you need a solution like Night Eye to fix that. Night Eye will enable smooth dark mode that will help you spend more time and be more productive while planning your next trip 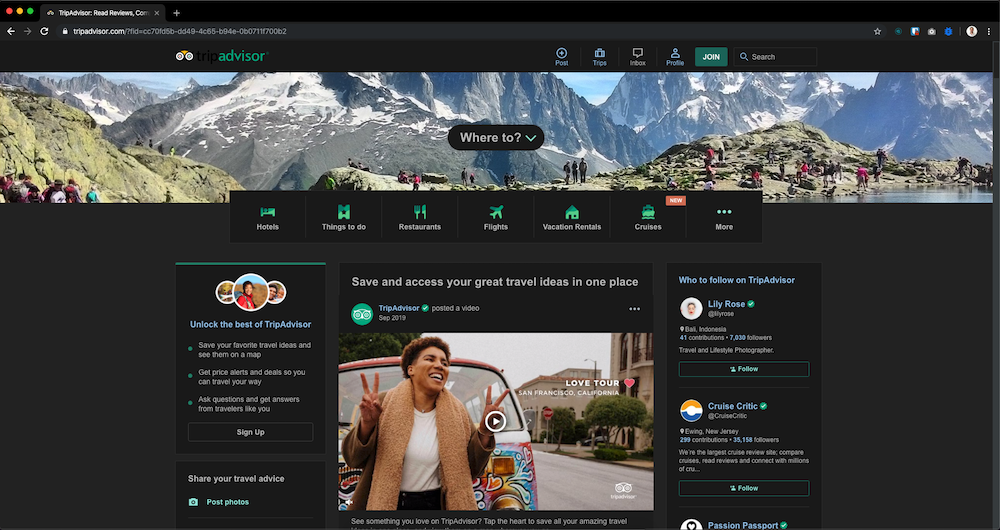 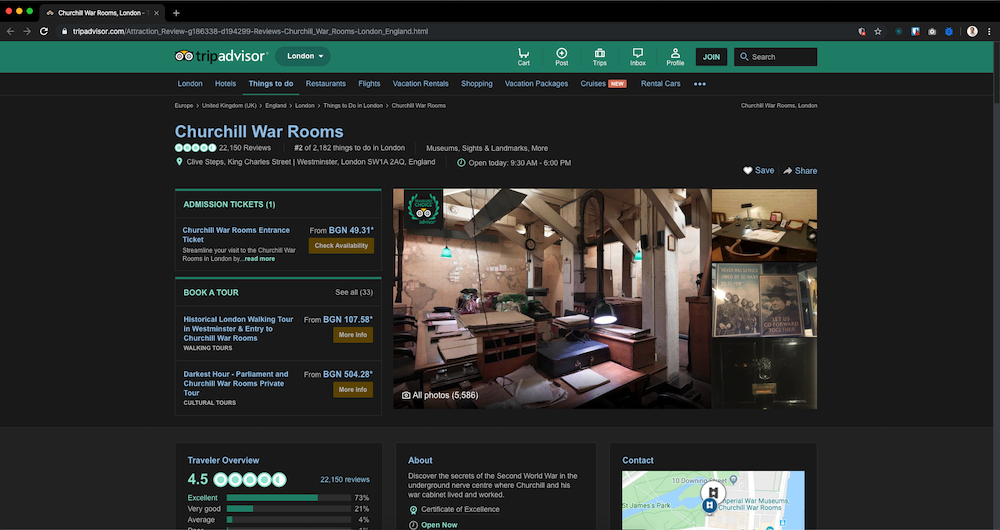 Night Eye works on almost all modern browsers. It is an easy to use extension that you install and forget. It will automatically enable dark mode on nearly any website you visit and help you protect your eyes.

How to Enable Facebook Dark Mode for Android, iPhone, and Desktop

Feel the difference. Choose a plan to ensure that you get every benefit from dark mode.